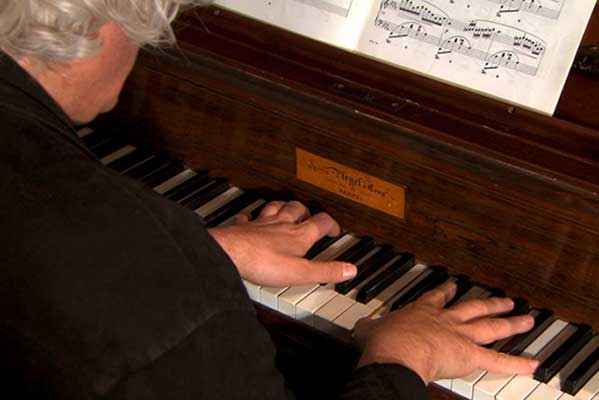 “I just finished watching the entire Chopin film, and found it really wonderful, especially the words spoken by Leif Ove Andsnes and Lars Vogt about their feelings when actually playing Chopin’s music, which were extremely moving to me, words my father would certainly have both appreciated and thoroughly agreed with.  Congratulations on this wonderful film! ”  Eva Rubinstein (daughter of Arthur Rubinstein)

Phil Grabsky brings us the music and life story of Fryderyk Chopin, considered one of the greatest composers of all time.

“In Search of Chopin is a superb account of a driven artist, providing an understanding of the creative impulse and how it is captured and expressed”  National Business Review

Chopin’s grave in Paris remains a place of pilgrimage and his music continues to sell out concert halls worldwide – but who exactly was this astonishing man? He was terrified of public performance; he fled his Polish homeland for Paris never to return; took up with the most notorious transvestite in France and, despite a life of ill-health, wrote some of the deepest and most powerful music ever written?  How exactly did a young Polish boy rise to such heady heights?

For four years, Phil Grabsky has travelled the globe in his quest to lay bare the life and music of Chopin.

By talking to acclaimed musical historians such as Jeremy Siepmann and bringing to the screen performances by such esteemed musicians as Leif Ove Andsnes, Daniel Barenboim, Ronald Brautigam, Kevin Kenner and Lars Vogt he hopes to answer those questions.