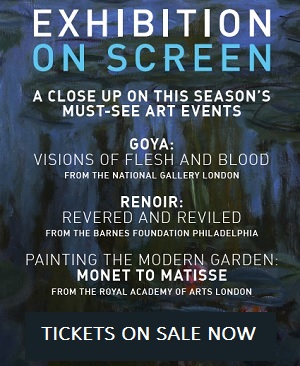 2016 promises to be an exciting, art-filled year with the release of Season 3 of EXHIBITION ON SCREEN!

We kick off in February 2016 with the international release of Goya – Visions of Flesh and Blood, a cinematic film on the highly acclaimed exhibition Goya: The Portraits from the National Gallery, London.

If you missed the opportunity to see this in the UK last month – or indeed the exhibition itself, which critics have called ‘the show of the decade’ – you will be pleased to know that Picturehouse cinemas are screening it on the 22nd February. We will also be bringing Renoir – Revered and Reviled to UK cinemas, a film that offers the chance to see the largest Renoir collection on the big screen.

International release dates for EXHIBITION ON SCREEN: Goya – Visions of Flesh and Blood